Following up on the Housing Allowance for Veteran Distance Ed

“The technology has advanced, but not the laws” says one of the veterans, Aaron Slatton, whom we spoke with this week regarding the Basic Housing Allowance reduction imposed on veterans who take classes fully online. “Simply put,” he said, “there is less benefit.”

The GI Bill was put in place to provide our service men and women certain benefits to help them resume a civilian life, including housing benefits while they are completing their education. 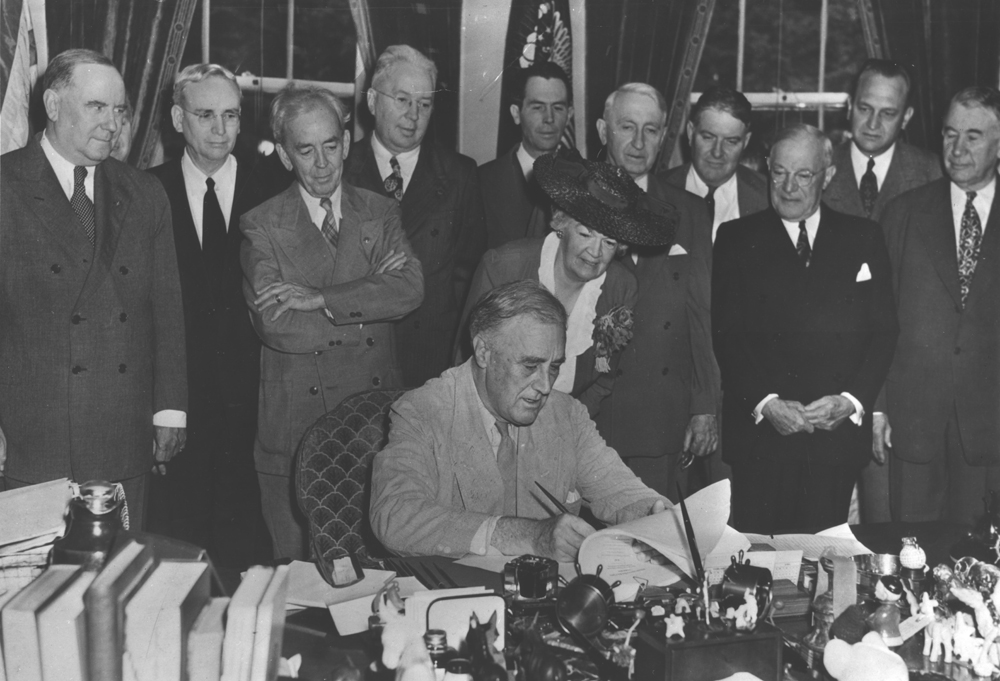 When signing the GI Bill, President Franklin D. Roosevelt said that this bill let our men and women in the military know that we “do not intend to let them down” (1944).

Our veterans deserve all the benefits that were guaranteed by this (and other, similar) legislation. I was happy to see Congress making additional updates to the bill, guaranteeing expanded benefits and opportunities for these brave men and women. However, as WCET reported last week, they missed a vital chance to correct a major issue in distance education for this student population.

Veterans of the U.S. armed services are eligible for funding to pay for tuition, fees, books and supplies, and a Basic Allowance for Housing (BAH) while pursuing postsecondary education, but ONLY IF their courses are taken fully on campus. If their courses are online, the BAH is cut in half (see (c)(1)(B)(3)).

After sharing the story of how the BAH decrease has affected veteran Danny Stuckey last week, WCET has received several more stories. Today, I’d like to share some of these.

Aaron Slatton, the U.S. Marine who I mentioned earlier, says that the BAH rule strongly affected him when he was using his GI Bill benefits, and also impacts the students he works with daily as a Veterans Affairs Specialist with Indiana Tech.

“There are many students who are forced to take an on-campus class so that they can collect the full amount of BAH. Distance Ed classes have the same content and amount of work that on campus classes have. It really makes no logical sense that I get paid less than an on-campus Vet, considering we both do the same amount of work. Either way, my housing payment doesn’t change. I don’t have a cheaper payment because I don’t go to school.”

Aaron is pursuing his MBA and also works full time to support his family, including his three-month-old daughter. Currently his family is only receiving half their BAH because to balance working fulltime and school, he takes his classes online.

Deborah Rydman, the Career Services Coordinator and VA School Verifying Official for University of Alaska Southeast, sent us several stories, including the story of a veteran she worked with who was faced severe consequences due to the BAH rule. He has stopped taking classes.

Deborah reminds us that life is different in rural Alaska: “I worked with one student last year who {was} taking our Business Administration degree program but lives over 1,000 miles away from our campus. He expressed frustration on how he couldn’t find a class at one of our branch campuses near where he lives for a semester, and was discouraged that he wouldn’t be able to complete his degree… He stopped taking classes after last fall semester.”

Another veteran brought up a very important detail: sometimes, whether a student takes a course online or on-campus, really isn’t their decision.

“Many universities…are dropping on-campus courses in favor of online courses. If I had it my way, I would take nothing but on-campus courses. Unfortunately, UAS (University of Alaska Southeast) students are no longer able to complete a degree without being forced to take some, or most of those required classes, online.

The clause of required time on campus for full benefits seems arbitrary. The only people it hurts are the veterans attempting to take advantage of what they have earned (by putting their life and mental health at risk).

The option to take on-campus courses is becoming increasingly difficult… The payout should be the same for each and every veteran that earned the GI Bill. No matter the method at which one chooses to use it.”

Students Waste Their Time and Benefits on Unneeded Courses

Another student struggled to balance school, GI Bill requirements and her family’s needs. “I have struggled with that situation because with the upper credits I needed to graduate… I often had to take classes that I was not necessarily interested in/focused on and had to sacrifice a very relevant course for one that was offered in the school. …

Several veterans told us that their family suffered because of the decrease in their housing allowance. One said: “I cannot afford to send my son to daycare and pay our bills with the limited BAH. Although I am a full-time student the only time I can do any of my coursework is after 7 PM. I go to school full-time only because that is the only way I get BAH “

Another added, “as a stay at home dad, finding time to do fatherly things and pay bills was a challenge. My job demands much of my time and commuting makes managing time a challenge. A lower BAH means restricting me to live in either a further location, which increases commute time, or living nearer and spending more money, thereby restricting my cost of living.”

A veteran and working mother told us, “it makes things difficult as a mom of four to work full-time, cook meals and give them full attention while going to class. It would be easier to be able to have help but I can’t afford that.”

Others told us that they were forced to move their families to different states so they could go to school but receive the full BAH.

We have almost 300 additional responses to our questions regarding the impact of the BAH reduction on our veterans. The students discussed that the BAH rule impact has forced them to take student loans, not use their promised GI Bill benefits, reconsider their choice of school due to cost of living, extended length of time to degree completion, and caused severe stress to them individually and to their families. American Public University System (APUS) collected these responses from their students.

The veterans we spoke with have several recommendations when it comes to changing this rule:

I was saddened by the survey comments that said they weren’t sure their stories would make a difference. Many of them feel that no one cares that they face this additional challenge while trying to work and achieve their degree.

Let’s not let them down – It’s your turn to act.

Help us by contacting your representative or senator and asking them to address this issue as these bills move forward. We included a letter template in our previous blog post.

Time is short, the House will act this week and the Senate plans to follow closely behind.

In Defense of the LMS

What role does research play in EdTech decision-making?

[…] had a related post expanding on this topic and this year, in November, we were thrilled to announce that the VA had addressed this issue for […]