In case you haven’t heard, WCET has turned 30th! That’s right, we’re celebrating our 30th year at our Annual Meeting in October. As part of that celebration, we invited Ray Lewis, an early WCET Steering Committee member and WCET friend, to give us an overview of some of the history leading up to the creation of your cooperative 30 years ago. Ray discusses the idea for WCET, the research efforts which took place prior to WCET’s creation, and initial cooperative and focus designs.

Thank you Ray for today’s post, it was wonderful to learn so much about the work that went into starting WCET.

We hope you enjoy this walk down memory lane (as well as the outstanding photos included in this post). Also, can anyone tell me who is wearing the tiara in our first photo? I really want to know.

We live in an age when the Internet is so ubiquitous that many educators never consider using alternative technologies to reach learners. In the years leading up to the creation of WCET, way too much time was spent debating the merits and limits of a huge menu of video, audio, and computing technology options. Many of these technologies have since been integrated into Internet applications and others are no longer relevant. One of WCET’s major contributions has been to guide its members through this maze and into an era when the primary focus is on educational services that can be delivered largely by a single technology. 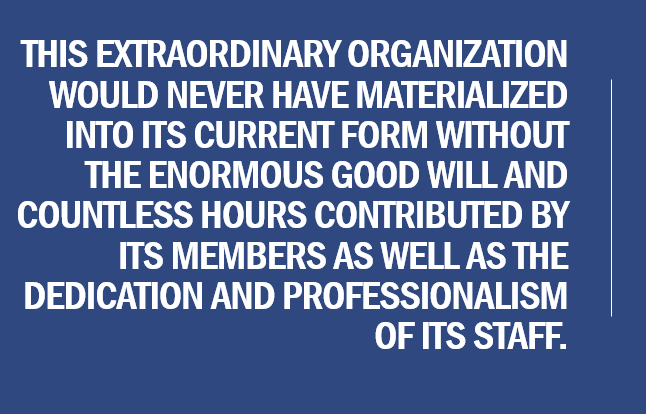 Looking back at the 30-year history of WCET and all the technological change that has occurred, it’s amazing that this organization has been so resilient and successful. Starting out as it did on the cutting edge of educational technology in the 1980s certainly helped. But I believe the most critical factor in this success story is the genuinely collaborative nature of the organization from its earliest days.

Since its founding in the 1950’s, the Western Interstate Commission on Higher Education (WICHE) has focused on facilitating resource sharing among higher education systems of the West. In addition to its student exchange programs, WICHE was actively involved in helping coordinate higher education access to super-computers in the very early stages of (what eventually became) the Internet. This was done in cooperation with National Science Foundation (NSF) and the U.S. military. These activities eventually led to the creation of NorthWest NET, a collaboration that included over 40 universities in the West. In the campus-based computing arena, WICHE found it could play an important role.

The research and instructional benefits of large mainframe computers were obvious for on-campus students and faculty during the 60s and 70s and beyond. During the same period, there were parallel advances underway in telecommunications (video, audio, computing) that were making it easier for campuses to deliver services to learners in distant community settings, workplaces, and even homes.

Many of the early innovative approaches to using information technologies to serve off-campus locations originated in the rural regions of the West (e.g., Alaska, Utah). These developments didn’t go unnoticed at WICHE, even though initially it wasn’t obvious that there was a logical role for the organization to play in that arena.

In 1981, Richard (Dick) Jonsen, Deputy Director of WICHE, took the initiative to provide the WICHE Commission’s Committee on the Future with an overview of some of the major trends in the use of telecommunications technologies in higher education. He invited Ray Lewis, Research Director at the Center for Learning and Telecommunications at the American Association for Higher Education, to speak to the group in June 1981. Following this presentation, WICHE staff asked Lewis to write a report documenting current practices nationally and in the Western states. In addition to the overview, the report, published in October 1981, included a number of actions WICHE could consider taking to help Western states and institutions more effectively use these technologies to serve their largely rural populations (e.g., research, networking, policy development, resource sharing, technical assistance).

Following this initial phase, WICHE staff and consultants conducted research into a number of different telecommunication-related topics. These included a 1983 study of high-tech education and manpower by Mollie McGill and Holly Zanville (now of Lumina Foundation) and a 1984 catalog of televised higher education resources by Mollie McGill. 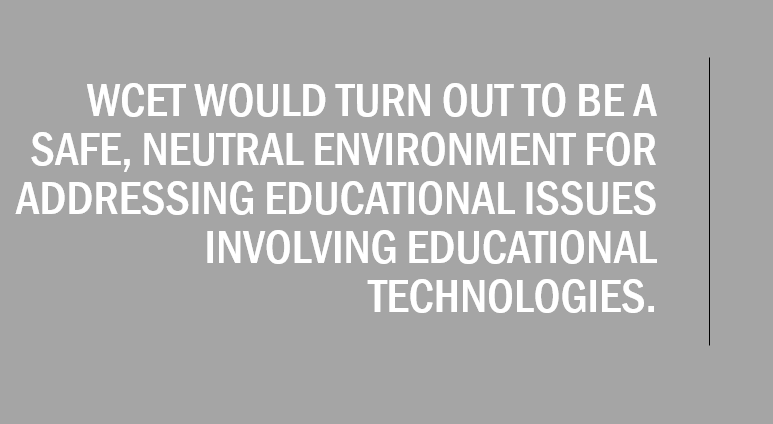 In 1985 Ray Lewis and Dick Markwood, with assistance from Mollie McGill, conducted two major surveys of Instructional Application of Information Technologies. One survey included the five northwestern states and the other included all 13 WICHE states in the West. These surveys were supported by a number of foundations including the Annenberg/CPB Project, Northwest Area Foundation, and the Murdock Charitable Trust.

In total, the surveys included responses from 344 public and private two-year, baccalaureate, and graduate/professional institutions throughout the West. In addition to enumerating which technologies campuses were using, the surveys documented academic content areas, types of learners, faculty incentive/reward policies and participation in collaborations and networks. State higher education executive officers were also surveyed regarding current and potential policies.

The survey also asked institutions what types of potential collaborative activities would be most helpful to them. Many of the activities that ranked the highest (e.g., information sharing, networking, faculty training, serving remote learners) are among those that would eventually be provided by WCET when it formed three years later.

With the rapidly accelerating pace of technology uses in higher education during the 1980s, state policymakers, as well as educators, were looking for ways to manage the changing environment. In 1987, WICHE published a study entitled State Higher Education Policies in the information Age, edited by Dick Jonsen and Mollie McGill as well as a keynote speech on state policy given by Richard L. Van Horn.

The eventual creation of WCET would provide both educators and policymakers with a very effective forum for sharing, developing and even advocating for effective policies. WCET would turn out to be a safe, neutral environment for addressing educational issues involving educational technologies.

In the mid-1980s, higher education leaders at the institution and state levels in the West began exploring ways to cooperatively address the many technology and education challenges they faced. The Northwest Academic Forum, the State Higher Education Executive Officers (SHEEO), and WICHE were among the most active organizations in these conversations.

In 1987, WICHE took the initiative to develop a plan for a regional telecommunications cooperative that would address objectives and needs common to all Western states. WICHE hired a consultant—Dwight Dively from Washington– to examine the current status of telecommunications network planning in each state. They also hired another consultant–Ray Lewis from Oregon—to propose a framework for the organization, membership and objectives of what was originally to be called the Western Regional Telecommunications Cooperative. The document that included both of these reports was completed in mid-1987 (here’s the table of contents from the original report and the first page with an executive summary).

Both reports envisioned levels of cooperation that were somewhat more expansive than what would initially emerge as WCET. In addition to describing current educational telecommunications capacity in each state, Dively encouraged states to consider more interconnectivity and cooperation among state educational delivery networks (e.g., microwave, satellite, broadcast, and videotape). In most cases, the technical and turf obstacles to the cross-state connectivity that he cited turned out to be more powerful than the advantages of cooperation during this period before the arrival of the Internet.

While the general idea of a Western Regional Telecommunications Cooperative had emerged from a series of meetings and conversations among educational leaders, no specific design had yet been formulated. Most of the features of the cooperative concept outlined by Lewis are recognizable in the current WCET structure, programs and membership. The proposal did assume more involvement from the K-12 community and non-educational state agencies, which was true in WCET’s early days.

The report envisioned a cooperative governance and administrative structure of multiple committees supported by consultants with only a two-person paid staff and an annual budget of $170,000. Should we be surprised that a consultant underestimated the need for staff and advocated for the use of consultants? Of course, in 1987 there was no way of foreseeing that the organization that was to become WCET would grow to include hundreds of organizations across the U.S. and Canada.

In 1988 and 1989, Dick Jonsen (having risen to the post of WICHE Executive Director) and Mollie McGill traveled to each state in the West to conduct convenings to test the ideas. This was only possible due to the partnership with and leadership of the higher education executive offers in each western state. Each state hosted a meeting and invited everyone from presidents to legislators to faculty to community leaders. They provided great feedback, support, and ideas that shaped the budding organization. At the first Annual Meeting held in 1989, the idea could not be contained to the West. Oklahomans attended and were granted the right to participate.

The activities during the 1981-1987 period cited here all helped lay the groundwork for the eventual formation of WCET in 1988. This extraordinary organization would never have materialized into its current form without the enormous good will and countless hours contributed by its members as well as the dedication and professionalism of its staff.

Staying Afloat During the Perfect Storm

YOU at College: Personalizing Well-being and Success for Every Student

1 reply on “WCET’s Pre-History: Origins of a 30-Year Old Cooperative”

[…] local microwave, two-way analog or digital video, and other means. To learn more, see the WCET pre-history from Ray […]