Today we have the privilege of hearing from Tanya Spilovoy, director of distance education and state authorization at the North Dakota University System, as she shares with us the journey of an open educational resource initiative that has what we all want for higher education — support from legislators.

Folks love to talk about the soaring costs of higher education and the national student debt load. We’ve had the same concerned discussions in North Dakota. Then, we decided to do something about it. A 2013 legislative interest in increasing the use of Open Textbooks kicked off a revolutionary plan in the North Dakota University System. At that time, it was estimated that North Dakota University System students spent around $1,100 per year on textbooks. I was asked to work with a team made up of faculty, a student, technologists, and provosts to draft a white paper exploring the concept of open textbooks in response to that legislative request. The stakeholders discussed the results of the white paper along with many other important issues.

After the white paper was complete, the project lost momentum. And, I remember thinking, “Someone needs to finish the Open Educational Resources initiative.” I waited for someone to step up and do the work. And then, I realized that the “someone” was me.

I spoke with Dr. Lisa Feldner, the Vice Chancellor for Institutional Research and Information Technology about my ideas to take Open Educational Resources from concept to reality. She said, “I think you should go for it.” And, so I did.

Over the next few months, I spent a significant amount of time researching, planning, preparing presentations, and collaborating with stakeholders across the North Dakota University System. What makes the Open Educational Resources initiative in North Dakota so unique is that it is now supported by the Council of College Faculty, the North Dakota Student Association, the State Board of Higher Education, legislators who serve on the Interim Higher Education Funding Committee at the Legislature, and the North Dakota University System. Gaining the support of so many different groups has taken time, persistence, and a passion for improving higher education.

On October 2, 2014, the State Board of Higher Education included increasing the use of Open Educational Resources in its five-year strategic plan. In addition, Governor Dalrymple’s biennial budget sets aside $220,000 for funding “open educational resources.” On January 15, 2014, House Bill 1261 was introduced, proposing the creation of a higher education open educational resources incentive grant program. The initial investment and collaboration with Dr. David Ernst, the executive director of the University of Minnesota’s Open Textbook Library, and other repositories is estimated to save North Dakota students millions of dollars in textbook costs. While the full plan to train and support faculty in developing and adopting OER has not yet been implemented, a few innovative early-adopters like Teresa Tande and Michelle Murphy at Lake Region State College and Eric Murphy at University of North Dakota, are beginning to use Open Educational Resources in their classrooms. These preliminary classrooms have produced positive results for both faculty and students. 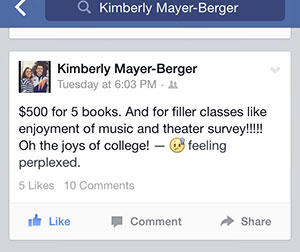 The Open Educational Resources initiative could have great impact for students like my friend, Kimberly Mayer-Berger. She is a single mom who recently returned to finish a degree she started years ago. She and I talk a lot about the financial and time commitments she faces by adding college to her work and parenting responsibilities. We strategize her road to graduation. Last week, Kimberly wrote a Facebook post about the high cost of her college textbooks.

While Kim’s post is sarcastic, the high cost of textbooks is no laughing matter. I know there is still a lot of work to be done in North Dakota before Open Educational Resources are commonly used in a variety of classes. The North Dakota Legislature has the final say on whether project support is appropriated – and they’re talking about it now. We’ll know at the end of the session whether Open Educational Resources funding survives.  But the possibility of lowering the cost of college attendance for students like Kimberly truly makes it all worthwhile. 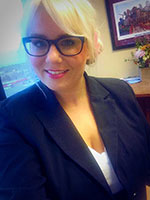 […] together for a common goal of improving higher education by reducing textbook costs for students. A 2015 post previewed this work, and this post outlines the plan, the people, and the […]