Earlier this month, the U.S. Department of Education’s National Center for Educational Statistics (NCES) released the third year of Integrated Postsecondary Education Data System (IPEDS) data that reports Distance Education (DE) student enrollment for the Fall of 2014. This is the third consecutive year that IPEDS included the enrollments for Distance Education and that WCET has reported on the yearly counts and the year-to-year trends.

For the third year, I am pleased to be working with Terri Taylor Straut who is contracting with WCET to compile the data and perform the analyses with me. This blog post gives you a few highlights of what we have uncovered so far. Early in the new year, we will provide you with data tables and graphics on the most interesting statistics. We will follow that (probably in February) with a deeper dive into the context and interpretations of some data items. For example, we will follow-up with select institutions to see if they still are experiencing some of the problems submitting the IPEDS data as we reported two years ago.

Meanwhile, here is a little Christmas present for the data geeks out there. Analysis of the sector data reveals that many of the trends we identified in the 2013 data earlier this year continue with the 2014 data. Below are initial observations from Terri.
Russ Poulin, Director Policy & Analysis, WCET 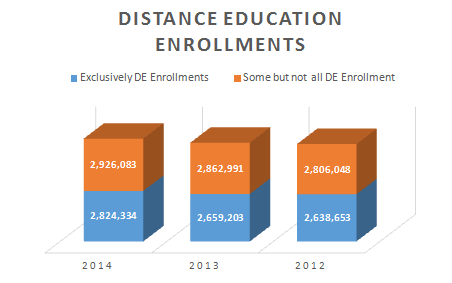 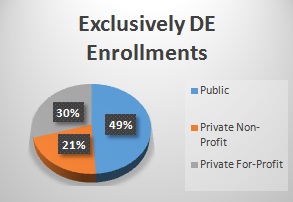 Now that we have three years of IPEDS data for Distance Education, we can begin to look at trends with more confidence. Comparing 2014 Exclusively DE enrollments to the same sector data from 2012, reveals interesting trends. 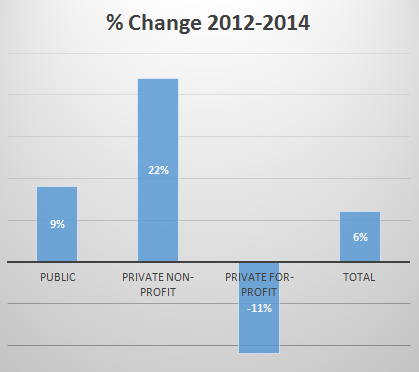 While much of the data represents good news for distance education, there is one troubling trend revealed in our initial analysis, institutions continue to report that they don’t know where some of their students are located. In fact, there is approximately a 5% increase between 2013 and 2014 in Exclusively Distance Education enrollments in the U.S., State Unknown (4.5%) and 5.3% reported Location of Student Unknown/Not Reported. 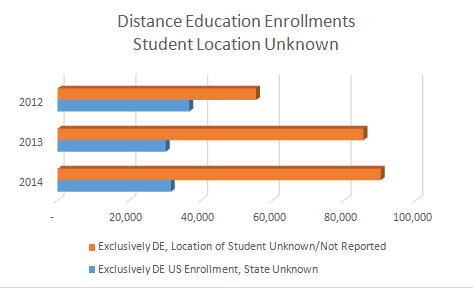 We have previously reported concerns with the reporting methodology used by many institutions when reporting their DE enrollments to IPEDS, but the IPEDS data is currently the best source or enrollment data. It is possible that the 2014 data is more accurate, as institutions have had more time to refine their reporting.

We will explore this issue, other issues behind the data, and additional statistical analyses when we conduct deeper research early in 2016.

I suspect that the uptick in reports of students in unknown locations results from institutions getting a better handle on their own details.

Q: Are students in unknown locations eligible for Title IV aid? I don’t see how they could be.

Alan –
We hope so. With that statistic, as with several others, we are curious about the story behind the numbers. We will continue to do some checking and provide some deeper analysis in coming weeks. If it is the same group of institutions that can’t report this data, then that is more alarming.

Those students are totally eligible for Title IV aid. Since the federal regulation (Chapter 34, 600.9(c)) was vacated, the Department can not enforce the requirement that institutions be in compliance with state authorization laws. And the first step in compliance is knowing where your students are located.

[…] rate than higher education overall – the IPEDS data release recently for Fall 2014 indicated that overall enrollments in colleges and universities were down 2.2% over the previous 2 years.  However, online learning enrollments continued to grow, with a 6.6% increase in enrollments over […]

[…] this week,WICHE Cooperative for Educational Technologies released their third annual report of NCES data on distance education student enrollment for the fall of 2014. WCET plans to continue […]

In regards to the Title IV issue, to be eligible for federal student aid students don’t need to live in the US, but they need to be citizens or a certain type of eligible non-citizen (a super restricted group that is tough to qualify for in general.) When a student files a FAFSA, data checks are conducted with the Department of Homeland Security and other agencies which confirm citizenship status. For this reason, I would say citizenship status matters more than where the student is geographically located.

There is also the question of whether the college is eligible for Title IV participation. In the U.S. about 80-85% of degree-granting institutions are eligible, but there are also some nondomestic institutions that a student can attend using Title IV aid if the feds have approved the school.

[…] We reported some preliminary results in December. Any differences should be due to the changes that we made in harmonizing our data set […]