Today, we welcome Terri Taylor-Straut, Senior Research Analyst for WCET, to WCET Frontiers. Terri joins us to review some of the trends in the recently released information and to provide some intriguing conclusions that can be drawn based on several years of analysis on these data points. Thank you Terri for today’s post!

WCET has been analyzing and reporting on the Integrated Postsecondary Education Data System (IPEDS) data that reports distance education course enrollment since the data became available for the Fall 2012 term. These data are reported to the U.S. Department of Education’s National Center for Educational Statistics (NCES) annually as part of the IPEDS Fall Enrollment reporting. Based on the Fall 2013 data, WCET was the first organization to report that there are significant differences in the distance education course enrollment trends based on higher education sectors.

Public institutions of higher education continue to educate nearly three-fourths (73.0% in 2016) of all enrolled students, regardless of mode of delivery. Private non-profits reported 20.9% of 2016 enrollment; private for-profits reported just 6.1% of enrolled students. Any discussion of sectors should be grounded in an understanding of the relative size of the sectors. Publics remain by far the largest sector, so small changes in the public sector impact the whole data set. 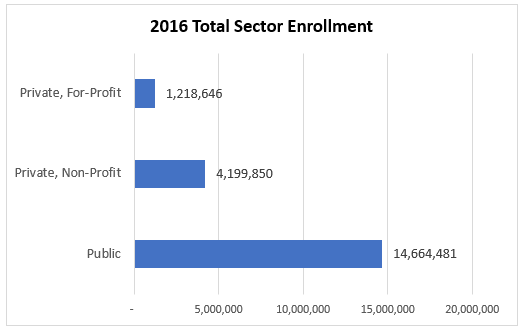 Significant Variation in Results Over Time by Sector

Overall higher education enrollment has declined by 4.0%, or 845,466 students, over the four-year period. 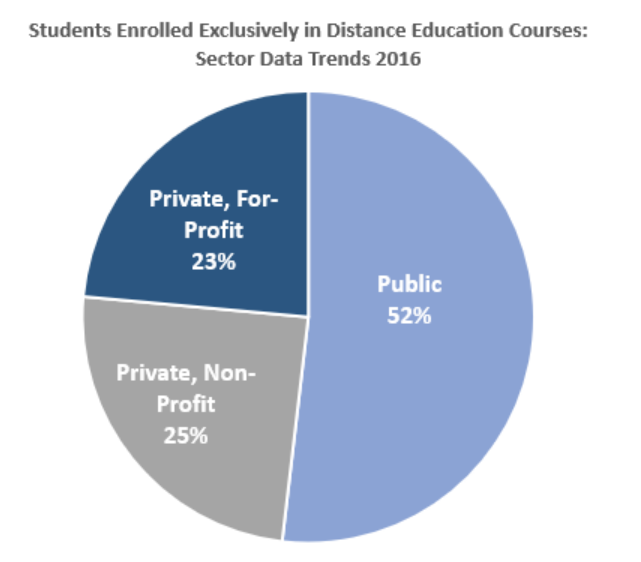 Exclusively Distant Students are Growing for Public and Non-profit Sectors

The four-year trend results for students enrolled in “some but not all” distance education courses are less dramatic than those reported for “exclusively in distance education courses” but they reveal similar trends. Non-profits again lead with 35.7% growth in these enrollments; public institutions reported nearly a 20% (19.7%) increase. The only sector to report declining enrollment over the period is for-profits with a 6.8% decline.

In analyzing these data, it is interesting to note the differences in the base enrollment numbers for each sector. The four-year growth in public students taking “some but not all” of their courses at a distance was 467,135. This comes close to equaling the total number of students enrolled in some distance courses (519,849) for the other two sectors. The percentage growth for non-profit institutions was much higher, but it started with a much lower enrollment base.

Since this category is simply the combination of the two categories of distance education enrollment that IPEDS requires, it is not surprising that the trends remain consistent, with non-profits reporting large gains at 47.5% in the four-year period; publics reporting healthy growth at 21.7%. The private for-profit sector is the only one to report enrollment decline at the rate of 22.1% between 2012 and 2016.

As we have previously noted, it is not our intention to place value judgments on the different sectors, but rather to continue to chip away at common myths that exist about distance education enrollments by sector. With four years of distance education now available, the trends are clearer. This information informs the marketplace as well as those responsible for regulatory oversight.

One trend that has never wavered is the fact that public institutions continue to educate the vast majority of students, both on campus and by distance education courses.

WCET has worked with other professional organizations with an interest in the IPEDS distance education data since the 2012 data became available. These organizations include e-Literate (particularly Phil Hill) and Babson Survey Research Group (BSRG). While these organizations have worked closely together, and at time shared IPEDS distance education data sets, slight differences in the data have been reported from year to year. The purpose of this blog is to illuminate trends in the distance education data across sectors and over the four-year period where IPEDS data is available. Comparisons to the historic data reported prior to 2012 by BSRG allows us to approximate the same measures used by the prior BSRG surveys. Phil Hill has done a fine job of illuminating the differences in the data and definitions used over time. We remain grateful for his continued work in this area.

A reader raised the question last year about the impact of the transition of for-profits to non-profit status. In response, Phil Hill analyzed the data to show the impact to be negligible. As those transitions happen in the future, those changes will need to be part of any sector-based analysis.

Readers may also be interested in the prior WCET blog posts and reports written focused on the IPEDS distance education data.

Supporting Faculty Through a Learning Community

[…] growth in distance enrollments while the overall higher education student population declined: Distance Education Enrollment Growth—Major Differences Persist Among Sectors. This was the eleventh most popular […]