Breaking news! The 2016 Federal regulations for State Authorization of Distance Education have been delayed. Today we are joined by Cheryl Dowd, Director of WCET’s State Authorization Network (SAN), to discuss what we do know about the delay and provide further information. Thank you Cheryl for today’s post!

Does living through the Federal regulation of State Authorization of Distance Education feel like the movie Groundhog Day to all of you? Phil Connors, the hapless weatherman played by Bill Murray, re-lived the same day over and over again! So, I “googled” the movie to see how long Bill Murray was caught in the loop. The movie’s director, Harold Ramis, said that Bill Murray’s character was trapped for 10 years! We are all Bill Murray, or if you are a fan of the Broadway musical version, like me, we are Andy Karl.

Let’s Start at the Very Beginning

Our story begins about nine years ago. The Department of Education gathers committees of experts to negotiate details of specific regulations. As the result of a “negotiated rulemaking” panel working on new rules related to the administration of title IV funds, the Department of Education released new rules back in June 2010, which included a proposed Federal Regulation for state authorization for institutions being approved by their home states. BUT, the proposed regulation did not contain the language for state authorization of distance education. The additional language (600.9(c)), regarding distance education, was released in the final regulation in October 2010. The result was many institutions found that they must scramble to be in compliance with various states’ laws and regulations for the out-of-state activities of their institutions. States became more aware of their role in oversight of activities of out-of -state institutions that occur in their states. The story goes on…

No Consensus? A new regulation? Do you have a scorecard? Can we break out of the loop?

So, What Does This Actually Mean?

It means that although institutions are legally obligated to be compliant with the state’s laws and regulations for the out-of-state activities of the institution, the effective date of tying that state regulatory obligation to compliance with a federal regulation to participate in title IV HEA programs, has been delayed.

What Do Institutions Need to Do Now? 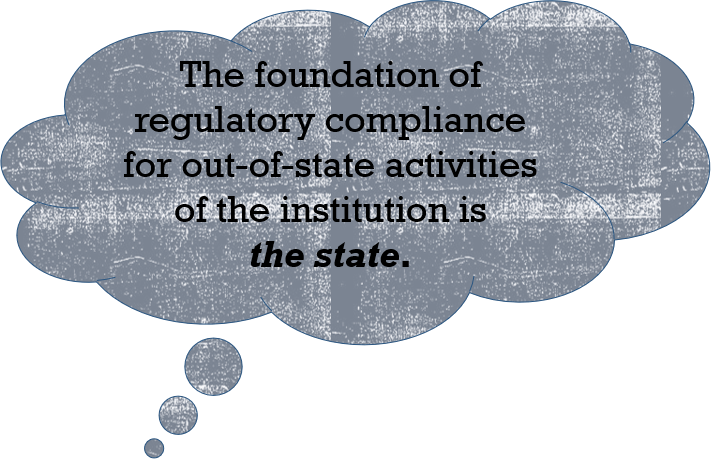 Being stuck in the Federal regulation loop, about whether title IV funds will or will not be tied to state authorization for out-of-state activities of the institution, is a challenge to explain at our institutions. However, we do have a message to share with our institutional leaderships: the foundation of regulatory compliance for out-of-state activities of the institution is the state. Breaking the federal loop is irrelevant to that message. The institutions cannot choose whether they wish to follow the laws and regulations of the state where the institution participates in activity. Institutions must be compliant in the states where their activities occur. So, the message is simple. Keep focused on state compliance including state licensure boards for the courses and programs offered out of state.

Meanwhile, unlike Bill Murray being caught in a continuous loop of 6 more weeks of winter, we are heading into summer and we will wait for the Department to give us our next dose of déjà vu!

Comparing Credentials: An Update on the Credential Engine

[…] the flowers, birds, and hints at warmer temperatures, we are continuing in Federal Regulations Groundhog Day for state authorization. The outcome of the 2019 Negotiated Rulemaking may be a positive move to […]

[…] readers of WCET Frontiers are well aware of the long 10 year drama of the State Authorization regulations. Then, like when Brett Favre retired but then didn’t retire, we saw Federal regulations that were […]

[…] Federal Regulation for state authorization of distance education has had a sorted history and has been subject to political and court battles over the past ten years. The original Federal […]

[…] Federal Regulation for state authorization of distance education has had a sorted history and has been subject to political and court battles over the past ten years. The original Federal […]