As part of our current series on MOOCs, we had planned to have Phil Hill (co-founder of MindWires Consulting and co-publisher of the e-Literate blog) as a guest blogger to update a January 2013 post for WCET in which he outlined how the California government was trying to drive higher ed.  Given today’s news about the controversial bill (regarding MOOCs, third-party providers, and credit), the additional insight is timely.  Phil Hill is a consultant and industry analyst covering the educational technology market primarily for higher education. Catch Phil on twitter @PhilonEdTech.

The big news today is that the controversial bill seeking to allow for-credit partially-outsourced online education in California has been put on hold until at least 2014. As reported today by Inside Higher Ed:

The plan’s chief backer, Democratic State Senate President Pro Tem Darrell Steinberg, is no longer trying to advance the measure and will not do so until at least August 2014. Rhys Williams, the senator’s spokesman, said Steinberg is waiting to see the results of new online efforts by the state’s three public higher ed systems – the California Community Colleges, California State University and the University of California. The public college systems are working to expand their online offerings internally and without outsourcing their students to ed tech start-ups with little to no track record offering for-credit courses.

“The UC, CSU, and Community Colleges plans for online course access are a welcome and positive policy outcome,” William said in an e-mail Wednesday evening. “Senator Steinberg is willing to see how they develop and assess whether they’re effective, before making a decision on whether SB 520 remains necessary.”

To understand this news in context, it is worth looking at the broader set of initiatives on online education in California. In January I wrote a post for WCET that described the new efforts from California state government to expand the usage of online education in the three public higher education systems.

In past years the primary role of state government was to take the lead on funding while working with statewide systems on enrollment policies to serve workforce and general educational needs. Last week in California we witnessed the state government, both from the governor’s office and the legislature, become the driving force of change for determining the role of educational technology and online education to transform the public systems. State officials are no longer content with encouraging and hoping that postsecondary institutions will develop a strategy for systemic change on their own.

The primary methods of state government involvement have been the following:

Disclosure: I, along with my business partner Michael Feldstein, actively participated in the Re:Boot California Higher Education conference in January and also wrote a white paper on the subject for the 20 Million Minds Foundation. The multi-pronged approach to support student access is broadly one that we at MindWires endorse, but we have recommended changes to the budget and SB520 to make them more effective. 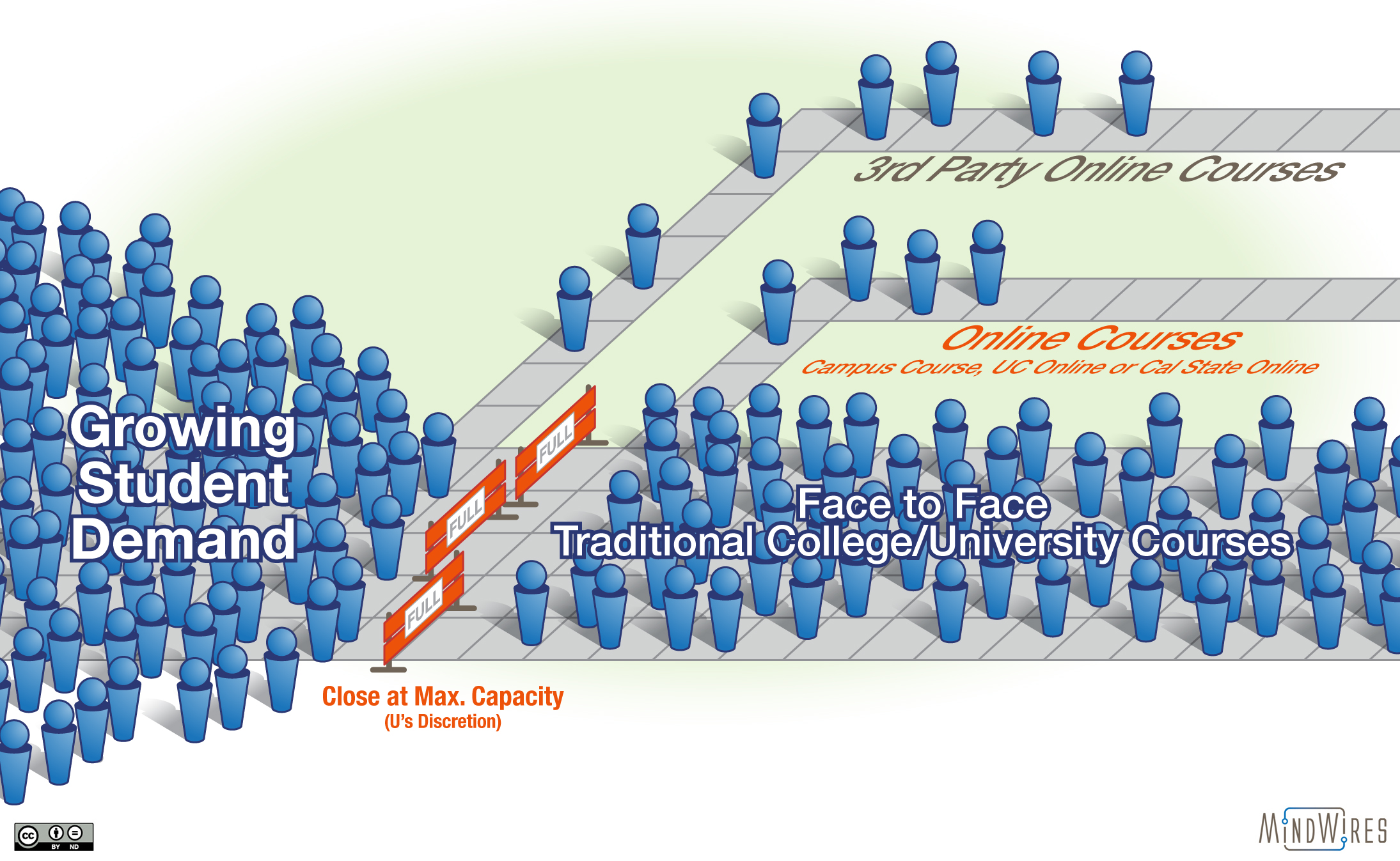 Resistance to SB520
As can be expected in the current environment, most of the public discussion has centered on SB520 and whether it is a route to allow for-credit MOOC courses. Even though the language of SB520 was and is not specific to MOOCs, there have been wink-wink nudge-nudge suggestions to this being a MOOC bill on both sides of the debate. This assumption has partially been fed by the public involvement of Sebastian Thrun, CEO of Udacity in the legislative process.  (NOTE: Update to this paragraph on 08/12/13:  I have removed the previous reference to Cousera involvement in the legislative process.  Coursera executives were not involved in discussions with state leaders prior to introduction of SB 520 and they have not testified before the state senate in support of the bill. The error was my own. – Phil Hill)

There has been tremendous pushback on the original conception of SB520, mostly coming from faculty unions and the CalState and UC systems. The deliberations as part of the legislative process led to significant amendments to the bill in April and May. The amended version was passed by the senate in June (follow link for summary of changes).

The changes are significant.  Originally envisioned as a third-party platform with a common pool of courses, the bill has been transformed to a grant program for each system to implement.  SB520 changed from a stick to a carrot. The rewritten bill addresses many, but not all, of the issues that faculty and system leaders have had with the bill.

In terms of SB520, there remains significant opposition to the amended bill.

It is unclear if SB520 will be revived, but it is clear that the bill itself never gained enough buy-in from higher education leaders to justify moving it forward this year.

Removal of Conditions for Additional Funding
The other legislative method that has changed is the additional funding for online education. The original plan was to tie the funds “to increase the number of courses available to matriculated undergraduates through the use of technology, specifically those courses that have the highest demand, fill quickly, and are prerequisites for many different degrees”.

In a somewhat surprising move, Governor Jerry Brown used a line-item veto to remove his own earmarks for the $10M each to the CalState and UC system (the funding remains, but the conditions have been removed) – effectively saying that the systems could use the money however they saw fit. According to Brown, “Eliminating these earmarks will give the university greater flexibility to manage its resources to meet its obligations, operate its instructional programs more effectively, and avoid tuition and fee increases”. The earmark for CCC to use its $16.9M of additional funding for educational technology remained in the budget.

Watering Down Initiatives or Negotiated Progress?
On the surface, it appears that higher education insiders might have defeated state government efforts to take a leading role in online initiatives. SB520 is on hold and possibly dead, and most conditions on the additional funding have been removed.

If you look under the surface, however, the outcome is not as clear. It turns out that the systems are in fact changing their priorities and investing in online to help matriculated students complete degrees at a lower cost, which was the original goal of state government leaders.

As briefed to the Board of Regents on July 18th, the UC provost (starting at minute 28 of recording) described their plans to use the $10M for Innovative Learning Technology Initiative. From the ILTI web site, ILTI’s strategy will stem from four interconnected components:

These goals very closely match the original goals from the state government. There is a long way to go, however, as the UC provost mentioned in the Board of Regents meeting. Currently there are only 33 undergraduate for-credit online courses in the entire system during the academic year (not including summer courses or extension non-credit courses).

The change is significant, however, in that just a year ago UC was pushing UC Online as its primary online initiative, and the goals of that program focused mostly on revenue-generation from non-matriculated students.

The CalState system announced today their plans for a new cross-enrollment online program, as reported in the Oakland Tribune:

This fall, for the first time, the nation’s largest public university system will offer the option of online courses to all of its students, using digital technology to overcome pervasive space shortages in real-world classrooms.

A program revealed Wednesday by the 23-campus California State University includes more than 30 courses approved systemwide, from Elementary Astronomy to the History of Rock and Roll.

This means a student from San Francisco State can sign up for a microeconomics course taught at CSU Northridge, while students from that Southern California campus can learn all about U.S. politics from a professor who teaches in San Francisco.

Effects of SJSU Plus Program with Udacity
We should not ignore the recent news out of San Jose State University (SJSU), where they ‘paused’ their pilot program based on an adaptation of Udacity MOOCs due to low passing rates (more here on the news, here on the findings to date). While this ill-fated program was not technically part of the state government legislation or budgeting, it certainly was tied to the bully pulpit of the governor. The poor results of the program will likely be used as an argument against further experimentation with MOOCs and even with online education expansion, but as I point out in the linked blog posts, the fact that SJSU is analyzing the learning outcomes data to revise the program is significant in itself.

Keep Watching
The situation in California is still fluid, and there are key issues to watch as they unfold. But behind the messy legislative process and headline-making pushback on state government involvement, there is a significant change in priorities occurring in California. The new focus on using online education as a tool to help matriculated students complete their degrees clearly seems to be a result of state government involvement.

MOOCs – A Question of Credit

8 replies on “MOOCs & Beyond: Update on California Government-Driven Online Initiatives”

[…] have a new post up at WCET with updates on the California Online Initiatives driven by state government, including […]

[…] have a new post up at WCET with updates on the California Online Initiatives driven by state government, including […]

[…] The SB 520 Bill that was sponsored by California State Senator Darrell Steinberg has been delayed until August 2014. The bill originally required the California Community Colleges, California State University (CSU), and the University of California (UC) systems to grant credit for online courses that were offered on platforms such as Coursera and Udacity. Senator Steinberg has delayed the bill to allow UC, CSU, and the community colleges to create their own online courses from the funds received through this year’s budget increase. CSU announced that it would allow students to take online courses offered by any of their 23 campuses. Plans are also in the works to create virtual labs and the UC system is focused on creating 150 courses that are either fully online or part of a flipped classroom. See also Phil Hill’s post about the delay here: http://wcetblog.wordpress.com/2013/08/01/moocs-and-beyond-california/. […]

[…] The SB 520 Bill that was sponsored by California State Senator Darrell Steinberg has been delayed until August 2014. The bill originally required the California Community Colleges, California State University (CSU), and the University of California (UC) systems to grant credit for online courses that were offered on platforms such as Coursera and Udacity. Senator Steinberg has delayed the bill to allow UC, CSU, and the community colleges to create their own online courses from the funds received through this year’s budget increase. CSU announced that it would allow students to take online courses offered by any of their 23 campuses. Plans are also in the works to create virtual labs and the UC system is focused on creating 150 courses that are either fully online or part of a flipped classroom. See also Phil Hill’s post about the delay here: http://wcetblog.wordpress.com/2013/08/01/moocs-and-beyond-california/. […]

[…] P. (2013) MOOCs & Beyond: Update on California Government-Driven Online Initiatives WCET Learn August 1 Phil Hill provides an excellent update on what is happening in the California higher […]

[…] P. (2013) MOOCs & Beyond: Update on California Government-Driven Online Initiatives WCET Learn August 1 Phil Hill provides an excellent update on what is happening in the California higher […]