This is the first of a series of posts providing insight on data regarding enrollments in distance education that was released by the U.S. Department of Education earlier this year.  Terri Taylor Straut crunched the data for WCET.  Terri has a deep knowledge of the distance education world and we appreciate her thorough analysis. As noted below, Phil Hill of the e-Literate blog has published several articles on this issue.  We communicated with him to make sure that our work was complementary with his and followed the same methodology.  The most recent version of the Babson Survey Research Group study of enrollments in online learning this year switched to using the IPEDS data.  Phil Hill and I provided an update in that publication on some of the short-coming we found last year with institutions answering the IPEDS survey.

We will use a headline format (highlighting the major findings) and have some observations that are slightly different than those made by Phil Hill or Babson.

The U.S. Department of Education’s National Center for Educational Statistics (NCES) released the second year of Integrated Postsecondary Education Data System (IPEDS) data that reports Distance Education (DE) course enrollment for the Fall of 2013. The fact that we now have two consecutive years of DE data may lead us to believe that we can finally begin tracking enrollment trends. However, as reported in the Frontier’s blog last fall, there are still issues with the reporting methodology used by many institutions when reporting their DE enrollments to IPEDs. Since the Fall 2013 data was reported to IPEDS before any publication about the challenges with the Fall 2012 were published by WCET and e-Literate, we believe that there are also problems with the validity of the Fall 2013 data. Please see the Methodology section at the end of this blog for more detail.

Previous reports by the Babson Survey Research Group and e-Literate have led with headlines about the overall flat growth in distance education. Our WCET analysis looks more closely at the sector data, which reveals more nuanced results and supports the continued dominance of public institutions in the offering of distance education courses to students nationwide.

A statistical note: The IPEDS Fall Enrollment is focused at the point in time of Fall 2013.  The survey asks institutions to separate students into three categories:

We focus primarily on the first two categories and add them together to create a new category of student who took at least one distance education course.

Publics Enrolled about 3/4 of all Students

Public institutions of higher education continue to educate nearly three-fourths (72%) of all enrolled students, regardless of mode of delivery. For all the discussion about the impact of the many new players and the profit motive, the majority of learners still attend public institutions. Non-Profits account for 20% of all enrollment, and despite all the hype, For-Profits enrolled just 8% of US learners in 2013.

The Percentage of Exclusively Distance Students Varies Significantly by Sector: 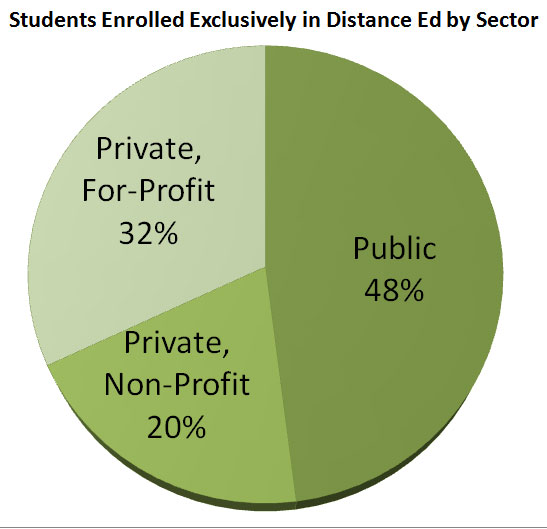 It is still a common myth held by many in the public, in the press, and in the policy arena that almost all of the enrollments in distance education is in the for-profit sector.  Nothing could be further from the truth.

Table 4: Students Enrolled in Some But Not All DE Courses by Sector

As described in the methodology section below, to approximate the Babson definition of online course enrollments, the IPEDS results for “students enrolled in some but not all distance education courses” and “students enrolled exclusively in distance education courses” are combined. When we look at sector data, using this broader definition of online enrollments, we see that more than one-in-four students (27%) took at least one online course in Fall 2013. And once again, there are far more enrollments in the Publics (3,744,242) than in the For-Profits (982,542) or Non-Profits (795,410). In fact, Public IHE online enrollments outnumber Private For-Profit enrollment 4 to 1.

Table 5: Enrollment in At Least One DE Course by Sector 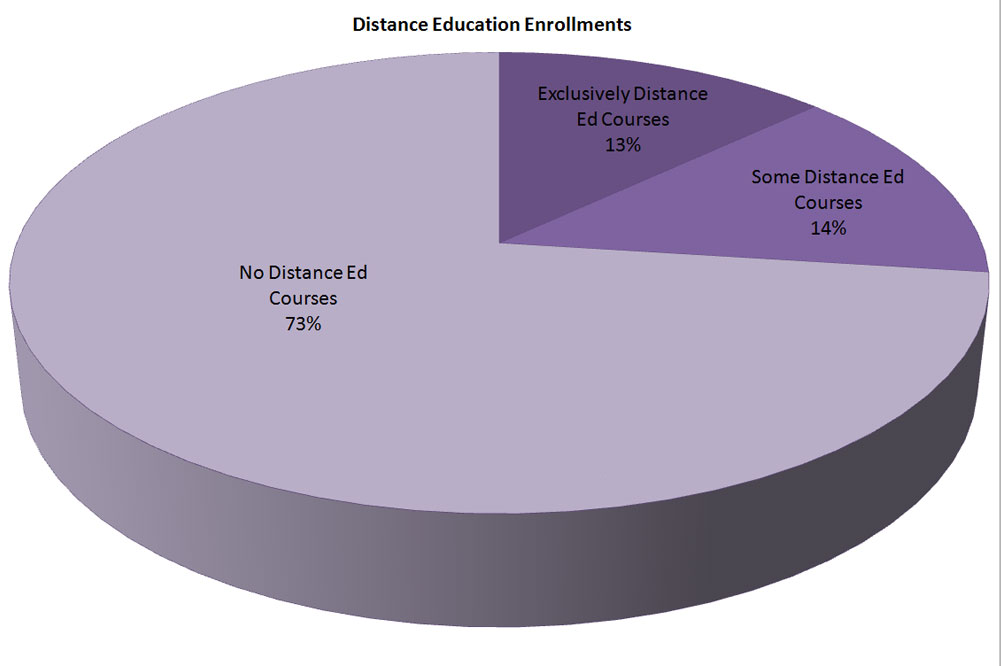 It is not our intention to place value judgments on the different sectors, but rather to puncture some common myths around distance education enrollments by sector.  Having a better handle on the activity in distance education enrollments and the type of activity (fully distance or mixed), helps us to better understand the marketplace whether we are interested in completive positioning or regulatory oversight.

The analysis of sector data reveals that Public institutions of higher education continue to educate the lion’s share of students and students taking online courses, both as a component of their course load and exclusively online. While the For-Profits enroll a higher proportion of their enrollments fully online, they remain far from dominating the distance education marketplace.

In the next blog post, despite reservations about the validity of the IPEDS data (see Methodology below), we will focus on comparisons between Fall 2012 and Fall 2013 enrollment in distance education courses.  We will examine the recent headlines regarding distance education growth being flat.  It is definitely true overall, but not in all cases.  Stay tuned.

Matching the Fall 2012 process, analysis of the Fall 2013 IPEDS data was conducted on all degree granting institutions in the U.S. This presents 4,724 institutions of higher education (IHE) in total, both 4-year and 2-year colleges. This data set matches the data set that Phil Hill, edtech author and blogger at e-Literate, has used in his recent blogs on the topic of Fall 2013 IPEDS data. According to Phil, the data set also matches the historical data reported by the Babson Survey Research Group (BSRG)/Sloan-C/Pearson survey. In order to approximate the same measures used by the prior survey, the data fields, “enrolled exclusively in DE courses” and “enrolled in some but not all DE courses” were combined to match the Babson category “enrolled in at least one online course”. We want to thank Phil for his early analysis of the Fall 2012 data and for his ongoing collaboration with the BSRG to ensure that the two data sets can be compared appropriately. Phil has also done a fine job of illuminating the differences in the data and definitions used.

The biggest caveat is this:  Given the errors that we found in colleges reporting to IPEDS, the Fall 2012 distance education reported enrollments create a very unstable base for comparisons.

The fact that the Department of Education has included DE data in annual IPEDS reporting is a solid step towards having comprehensive, reliable data from every institution in the U.S. As the reporting becomes more consistent from year to year and between institutions, the data will be more reliable and stronger conclusions will be able to be drawn from the data. We are not there yet.

The IPEDS DE data that the distance education market wants very much to rely upon as a baseline to measure industry changes will not be accurate until all 4,700+ institutions have a shared understanding of the definitions and reporting requirements. In addition to understanding how they need to report the data, they need the systems in place to collect and report accurate data about their DE students, as well as the entire student population. Without this consistency, the industry continues to function without any reliable measures of change from year-to-year, by sector, or otherwise.

“Previous reports by the Babson Survey Research Group and e-Literate have lead with headlines about the overall flat growth in distance education.”

D.Mitchell,
Thanks for the typo catch! It’s been corrected.

[…] the 2013 IPEDS Fall Enrollment survey and its counts of distance education enrollments.  The first blog focused on the 2013 survey statistics and the second compared the growth between 2012 and […]

[…] of the misconceptions and common myths related to Distance Education. WCET has devoted a series of blog posts that examines and explains the IPEDS Fall 2013 survey […]

[…] and universities have never taken an online or hybrid course.” As Russ Poulin at WCET notes, 27% of students took a distance education course in 2013 alone, meaning that the percentage of students with some […]

[…] at least one online course. Those and other findings, released this week in a three-part analysis by the WICHE Cooperative for Educational Technologies (WCET), suggest distance education is […]

[…] we have previously noted, it is not our intention to place value judgments on the different sectors, but rather to continue […]