The first blog post in this series analyzed the Fall 2013 distance education enrollment data (as released by the U.S. Department of Education’s IPEDS survey) sector-by-sector. The post revealed that one-of-four students took at least one distance education course and that public institutions continue to remain the largest provider of DE courses.

While the 2012 IPEDS survey provides a shaky base for comparison, let’s see what we can learn.  Again, thank you to Terri Taylor Straut for the deep dive into these data.

For the first time, we have two sets of IPEDS Distance Education (DE) data. The industry is anxious to have benchmark data that will help us determine trends in the marketplace.

While we still have grave reservations over the accuracy of the IPEDS data reported (some colleges used different definitions, some did not report all enrollments), the data set is the most comprehensive and bears examination.  The biggest caveat is this:  Given the errors that we found in colleges reporting to IPEDS, the Fall 2012 distance education reported enrollments create an unstable base for comparisons. 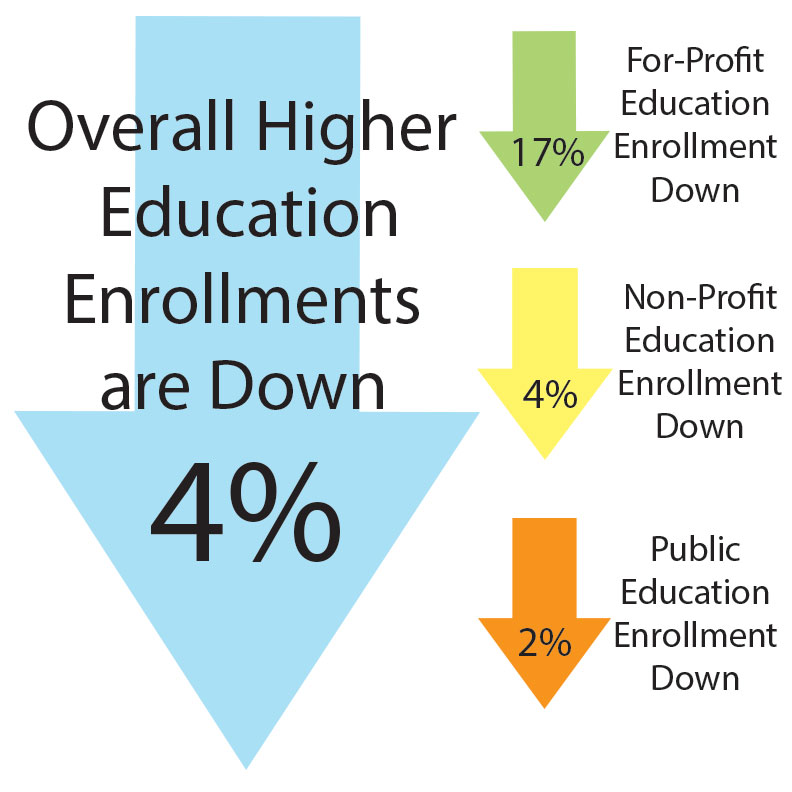 A new concern for the comparison of data by educational sector between Fall 2012 and Fall 2013 is the fact that many institutions have changed their IPEDS identification numbers and how they report. For example, in Fall 2012, all DE enrollments for the Arizona State University were reported through a single IPEDS number, in Fall 2013,  five separate campuses reported DE enrollments. Anyone who wants to dig into the data for themselves needs to be aware of these changes in the data set.

Overall Higher Education Enrollments are Down 4%

There is Significant (17%) Retrenchment in For-Profit College Enrollment

It is important to understand the enrollment trends by sector. The table below shows that while all sectors report declining enrollment, between 2012 and 2013, the retrenchment in the For-Profit sector, with a decline of 17%, is significantly greater than the other two sectors.

Comparisons of overall IPEDS enrollment data for Fall 2012 and Fall 2013 reveal no growth, or a slight decline (-1.3%) in total student enrollments. Analysis of the IPEDS categories, “exclusively enrolled in DE courses” and “enrolled in some but not all DE courses” reveal increases in enrollment of less than 1%. Given the known problems with IPEDS data validity and the fact that these changes are so small, we conclude that there is no growth in higher education DE enrollments for the first time since this data has been reported. Phil Hill’s blog on this topic provides additional detailed analysis. 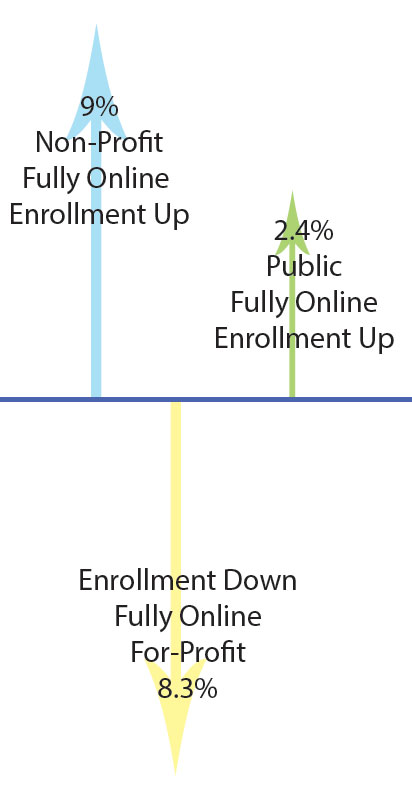 Combining all the enrollments from each sector provides an incomplete picture of the distance education trends.  For many reasons, the for-profit sector is in a major retrenchment mode.  Their fall enrollment decline (71,154 fewer fully distance students than last year) is dragging down the other two sectors.

Table 3: Percentage Change (2012 to 2013) in Distance Education Enrollment for Students Enrolled Exclusive at a Distance by Sector 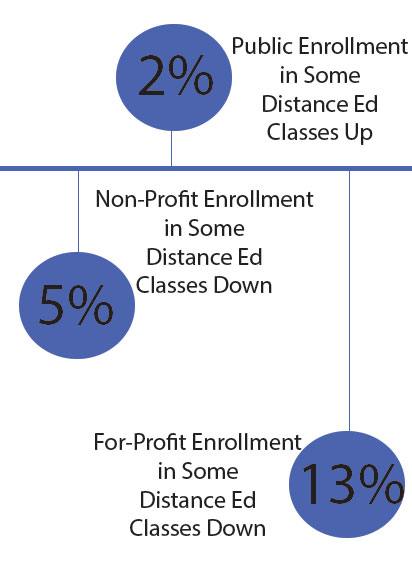 Enrollment in Some But Not All DE Courses is Also Mixed by Sector:

While the combined reporting shows a very small gain in enrollment of .7%, the differences among the sectors in these categories is significant. Publics maintained growth of about 2% between 2012 and 2013. Non-Profits report a loss of about 6% in this category of DE enrollments. The For-Profits report the greatest loss at nearly 13%. Once again, sector analysis reveals significantly different results.

Table 4: Percentage Change (2012 to 2013) in Distance Education Enrollment for Students Taking Some (But Not All) Distance Courses by Sector

Table 5: Percentage Change (2012 to 2013) in Students Taking At Least One Distance Education Course by Sector

Closer evaluation of the largest institutions in the distance education market, measured by student enrollment, reveals interesting results. There is large variations year-to-year of reported student enrollment in “exclusively DE courses” by some of the largest players in the market place. With large sums of money being spent on advertising by public and private schools alike, the winners and loser are a bit surprising.

Table 6: Institutions with Large Variation in DE Enrollments between 2012 and 2013

The public reporting and the Fall 2013 IPEDS data support the fact that some of the large For-Profit players are retrenching and have experienced significant enrollment decline. We were curious to see if the increased advertising that we are seeing from some of the smaller institutions is resulting in enrollment gains. 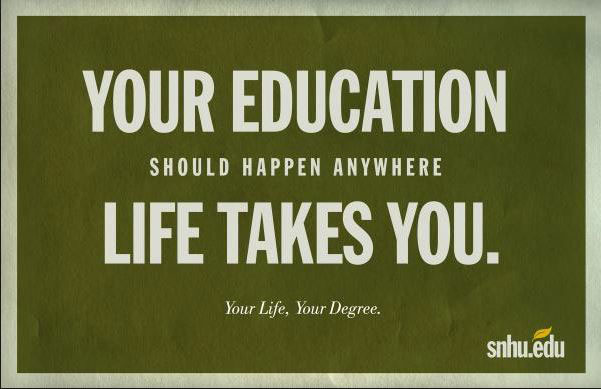 Arizona State University, a Public IHE, has been actively seeking students from outside Arizona through radio advertising, billboards, etc. According to their IPEDS reporting, ASU increased their online enrollments by 34% between 2012 and 2013, resulting in nearly 10,000 exclusively DE enrollments in 2013. A private, non-profit institution, Southern New Hampshire University, reported a whopping 94% enrollment growth in fully online enrollments in the same period, nearly doubling those enrollments from 10,679 to 20,701. While far from a scientific sampling, it does appear that targeted, effective advertising can have a significant impact on enrollment growth. What is not publicly known is the cost to gain those increases in enrollment.

The next blog in the series will focus on the data reported with regard to where the students who are in exclusively DE courses are physically located in relation to the geographic location of the IHE serving them. This is important information for institutional leaders responsible for compliance; regulators and policy-makers who are working to create a more manageable state authorization process.

Note: We erroneously listed Southern New Hampshire University as a public institutions in the second-to-last paragraph.  That has been corrected. (03/16/15)