This is the third in a series of three blog posts examining the 2013 IPEDS Fall Enrollment survey and its counts of distance education enrollments.  The first blog focused on the 2013 survey statistics and the second compared the growth between 2012 and 2013.  The survey also asked if institutions enrolled students from other states or other countries. We examine those statistics in this blog post, especially in relation to state authorization regulations.

With the addition of Fall 2013 IPEDS Distance Education (DE) data, for the first time we have year-to-year enrollment data to compare.  In theory, this should allow us to see whether institutions are improving their IPEDS reporting for the location of students. However, a WCET and e-Literate study published in September 2014, revealed numerous challenges with IPEDS DE reporting (using different definitions, not reporting some students) and cautioned putting much stock in year-to-year comparisons with the first few years of IPEDS data since data reliability issues remain. 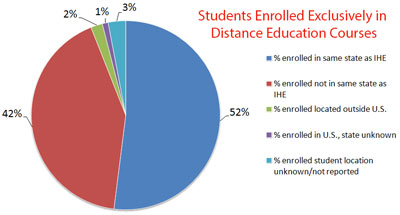 The IPEDS DE survey requests information about the location of the student only for those students who are “exclusively in DE courses”. This is a relatively small proportion of the total population of online students, representing 13% of all enrollments in both 2012 (see last year’s blog post) and 2013.  All of our analysis on the geographic location of the students is limited to this population of students enrolled “exclusively in DE courses”. 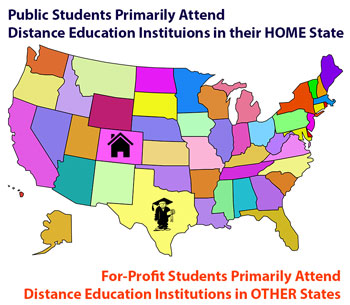 As we would predict, a large proportion of students enrolled “exclusively DE courses” are served by public institutions in their state of residence, 75% for 4-year and 91% for 2-year public schools. These numbers are consistent with last year’s data. We see a decline in in-state enrollment in the Private, Non-Profit 2-year IHEs from 61% in-state in 2012 to just 50% in-state in 2013. Private For-Profit 4-year IHEs report a consistent 13% of online enrollments as in-state, while their 2-year counterparts report a small increase from 26% in 2012 to 30% in 2013.

Public institutions report that about 20% of their fully online students are from another state for 4-year IHEs and about 5% are fully online for 2-year schools. This data appears to be consistent between Fall 2012 and Fall 2013 reporting. Private Non-Profit 4-year 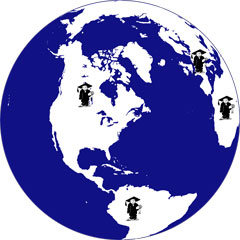 The proportion of institutions reporting that they serve students who are outside the U.S. remains small, no more than 2% in any sector. This reporting does not appear to have changed significantly between Fall 2012 and Fall 2013. Based on Fall 2013 data, international students who are served exclusively online number about 26,600. The institutions who serve these students need to have clear policies, procedures, and services in place for these students. Institutions also need to be aware of any laws of the students’ country of residence and need to comply with those laws.

Overall, we do not see improvement in the proportion of online students for whom their location is reported as “in US, state unknown” or “unknown/not reported”. In both 2012 and 2013, the total in that category remains about 4% of all “exclusively DE” enrollments.

It should be noted that the reporting methodology inconsistencies of even one large IHE can affect the percentage results since the numbers are relatively small. For example, in Fall 2013 a large for-profit institution reported almost 50,704 out of 52,131 exclusively online enrollments as “unknown/not reported.” This single campus accounts for 59% of the “unknowns” reported for the sector. Curiously, the same campus reported only 298 students as “unknown/not reported” last year, and another 500 as “in US, state unknown.” As long as IHEs are not consistent with their reporting methodology from year to year, the data on student location remains unreliable. This is unfortunate, since there is much attention on state authorization and compliance. We need good data to understand the magnitude of the state authorization challenge.

An analysis of the IHEs reporting the largest numbers of enrollments as “unknown/not reported” in Fall 2013 shows that some of these schools used the same reporting methodology in Fall 2012, but some actually seemed to have a had a better handle on where their students were in 2012 than they did in 2013. This, again, points out the importance of using accurate and consistent methodology from year-to-year within an IHE as well as the need to improve the methodology of the schools that continue to not report where their online students are physically located.

Bottom line:  If an institution does not know where its students are located, it cannot possibly be in compliance with state authorization regulations.

The Number of Institutions Serving Students Outside Their State and Outside the U.S. is Growing 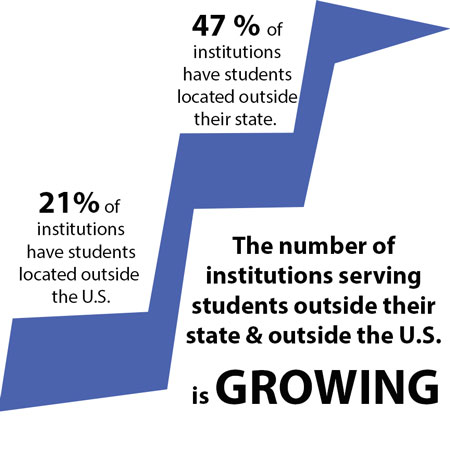 With nearly one-quarter of all institutions responding to the IPEDS survey reporting that they enrolled students exclusively at a distance outside the U.S., it is curious why this those students represents only 2% of the reported distance education enrollments. This is certainly possible as many institutions probably enroll only a handful of students in other countries, but it would be interesting to examine if this might be another source for reporting anomalies.

Table 2: Number of Institutions reporting students outside their state and outside the U.S.

More Institutions are Subject to State Authorization Regulations in Other States

As seen in our survey of institutions regarding their progress on obtaining authorizations, only 25% of responding institutions possess all the approvals that they need.  Since that survey, the Department of Defense has required all institutions offering Tuition Assistance for military personnel to have obtained the authorizations in each state.  The Department of Education has said that they plan to bring back their own federal requirements for students collecting Title IV funds in other states.  The State Authorization Reciprocity Agreement will require reporting of student enrollments at a distance in each SARA state.  Given all these pressures, institutions should be incentivized to provide clearer data on the locations of students in future years.

The analysis of the reported location of students in relation to the institution that serves them continues to show that some institutions are not reporting geographic location data. Either they are not collecting the data at the time of enrollment or they do not have mechanisms to accurately report student location. These institutions need to know the location of their students to ensure that they are in compliance with the state regulations in each state that is home to their students.

This concludes the current series examining Fall 2013 Distance Education IPEDS data. WCET will continue to monitor the data as it is released. We are hopeful that as institutions all adopt the IPEDS definition of distance education and as they gain the systems and experience to pull and report accurate student data, the industry will soon have a true benchmark.

3 replies on “IPEDS Fall 2013: Less than Half of Fully Distant Students Come from Other States”

[…] other instructional models.” This would be an incredibly valuable. In the last couple of years an analogous effort has taken place in post-secondary education, and a similar approach would benefit research and […]