The Purdue Acquisition of Kaplan – Background, Opinion, and Questions

There was quite a bit of surprise in the higher education world yesterday when Purdue University (a large land-grant university in Indiana) announced that it was essentially acquiring Kaplan University (a large for-profit institution). Lots of questions arise. This blog post includes some facts, opinion, and questions to keep the discussion rolling.

For $1, Purdue University will buy Kaplan University and, legislature willing, will operate it as a new Indiana public institution. In addition to the dollar, Kaplan will receive a cut of the income over the next 30 years.

Indiana Has Been a Pioneer Before

In 2006, then-Governor Mitch Daniels spearheaded a controversial move to lease a toll road in the state to a foreign company for a one-time payment of $3.85 million. In 2010, Indiana created Western Governors University, Indiana, the first state-based affiliate of the institution. Again it was Governor Daniels who used and an executive order to form the partnership focused on expanding offerings to adult learners in Indiana.

In June 2012, the former Governor was selected as President of Purdue University. As a hallmark of his Presidency at Purdue, Mitch Daniels has frozen tuition increases and sought cost-saving efficiencies in University administration. In my opinion, it is harder to point to meaningful academic or structural changes implemented during his tenure. Until now.

Why Did Purdue Pursue this Option?

In his presentation yesterday to the Purdue Board of Trustees, President Daniels showed that:

Purdue is too far behind to wait in an already crowded market. This move allows them to “fulfill their land-grant mission” of serving students more quickly than other options. You can see more in a brief introductory video featuring Daniels:

Purdue and Kaplan – By the Numbers

On Tuesday of next week, the new Digital Learning Compass (a partnership of Babson Survey Research Group, e-Literate, and WCET) will release its analysis the most recent US Department of Education IPEDS distance education enrollment numbers. With the help of Babson’s Jeff Seaman, I pulled some numbers on these two institutions:

Purdue wanted to make a major splash in online education. In terms of mode of instruction, they certainly found their mirror opposite in Kaplan University.

IPEDS has collected enrollment data since 2012.

The trends over that time are:

Burck Smith is the CEO of StraighterLine. He has been vocal about the changing landscape of the economics of public and private higher education. The following tweets provide a succinct analysis: 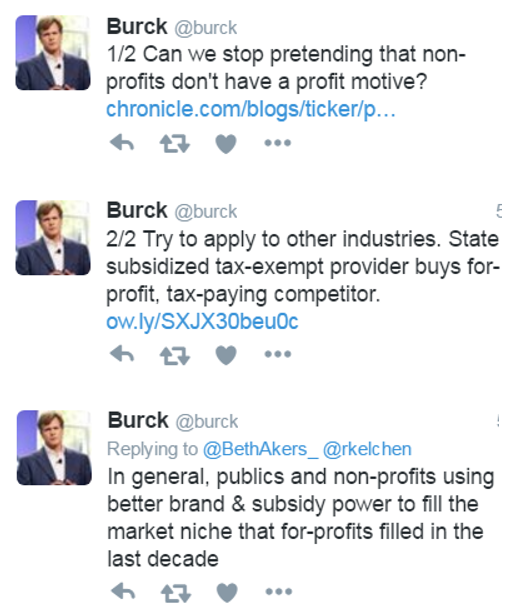 Questions (with a Few Comments)

Will the Indiana legislature approve this move? President Daniels is a beloved figure and the odds are good.

Will the Higher Learning Commission approve this move? They will be under tremendous pressure to closely scrutinize the agreement.

Is this just another ploy by a for-profit to become a non-profit? Could be.

Is this only the first of several similar agreements? We will keep you posted.

Will this lead to more competition and scrutiny for the rest of the distance learning providers? A good guess would be yes.

3 replies on “The Purdue Acquisition of Kaplan – Background, Opinion, and Questions”

The Lafayette Journal & Courier provides interesting back ground on how the Faculty Senate was notified and the questions that are being raised by faculty: http://www.jconline.com/story/opinion/columnists/dave-bangert/2017/04/28/bangert-questions-start-purdues-kaplan-deal/100982444/

It appears that Purdue purchased a complete operation without start-up overhead. It also appears that Kaplan sold an entire operation without continuing operational costs. At the same time, Kaplan will receive financial benefits without the headaches for 30 years. From the outside, it appears to be a win for both Purdue and Kaplan. At the same time, it will probably present some issues for the Higher Learning Commission. Given that it will provide some sorting issues for the parties, it will provide a learning opportunity for the rest of the higher education community. Perhaps the future will hold similar alliances. The online piece was faced with challenges when it was introduced 25 or 30 years ago. Perspective can be helpful.

[…] « The Purdue Acquisition of Kaplan – Background, Opinion, and Questions […]