Should we count all students when analyzing higher education, or only some of them? It’s not surprising that when you include all students, you get different results from that analysis than when you don’t. We think all students should be included. 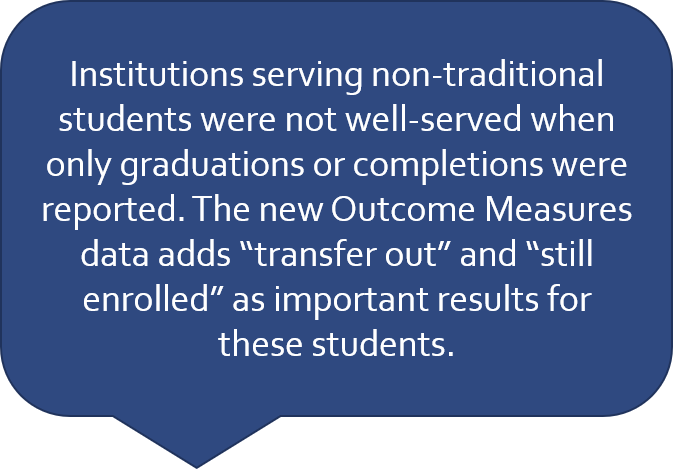 As reported in our last blog post (“Count All Students! New Outcome Measures Now Include Non-Traditional Students”), the U.S. Department of Education released data for a new Outcome Measures statistic last year. We thought that the Outcome Measures would provide more comprehensive data regarding student outcomes than the traditional Graduation Rate measure, which includes only first-time, full-time students. We were not disappointed.

In this post and the next, we will examine the Outcome Measures results for different sample sets of institutions. We will also provide you with our spreadsheet so that you can analyze the data and perform similar analyses for your institution.

What Are the Outcome Measures?

For the old Graduation Rate measure, institutions were asked to identify a “cohort” of students who entered as first-time (they’ve not attended college before) and full-time (they are taking a full load of courses) in the fall of a given academic year. Institutions track and report what happened to those students after a set number of years. 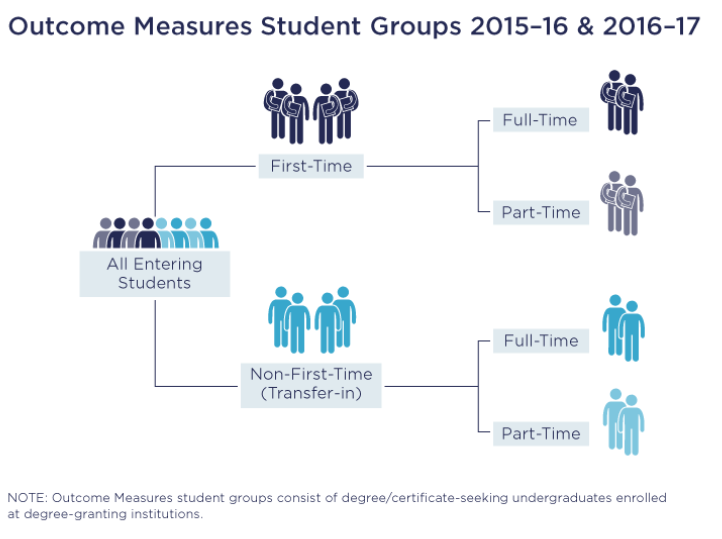 The first cohorts were compiled for the Fall 2008 academic term and the first dataset containing results was released last October.

In examining the results more closely, the data related to student matriculation and outcomes vary dramatically, based on the mission of the institution. This is especially clear when we look at institutions that are known to serve large populations of students taking “exclusively distance education courses.”

That list includes eight for-profit, five non-profit, and two public institutions. Why this group? We were searching for a group of non-traditional institutions and this seemed better than any bias resulting from picking a set of institutions on our own. In our next blog post, we will examine public community colleges and universities in one state.

We compiled a complete Excel file of the 15 institutions and their reported data for each cohort. In the analysis below we provide graphic examples of the highs and/or lows for the category in question.

Predictably, the reported number of students in each of these four categories is aligned with the mission of the organizations. For example, the largest number of first-time, full-time students among the 15 organizations are BYU-Idaho with 76.7% and Southern New Hampshire University with 67.3%. These institutions both have large on-campus students populations in addition to their online presence. The Outcome Measures represent overall institutional enrollments; therefore, these data combine on-campus and online enrollment.

Institutions long-focused on serving students at a distance reported few, if any, first-time, full-time students. In fact, of the 14 institutions that reported OM data, half (50.0%) reported under 5% of the 2008 cohort were first-time, full time students. For those institutions, their Graduation Rate is calculated on less than 5% of their overall student population, which is why the Outcome Measures will be a better barometer of student progress for them.

As with first-time, full-time, several institutions reported few or no first-time, part-time enrollments.

Institutions that focus on serving full-time students, with a promise of accelerated degree completion through credit for life experience or competency-based education, led with reported enrollment in the returning, full-time category for the 2008 cohort. Western Governors University (WGU) reported 93% of their students in this category; Ashford University reported 84.8%.

Excelsior College reported all (100%) of their enrollments as returning, part-time, followed by Capella University reporting 80.8% of their 2008 enrollment in that category. Both institutions have a mission focused on serving adult learners, many of whom cannot attend college full-time. As previously noted, institutions that are designed to serve full-time students reported very small enrollments in this category.

Student Outcomes: What Happened to the Students?

In addition to providing observations about the 2008 student cohort make up, the Outcome Measures data also provides insights regarding the disposition of the students over time. Institutions report student outcomes in one of four categories:

The data reported here are at eight years since matriculation (as of Fall, 2016). In addition to eight-year data, IPEDS also collects and reports outcomes at six years. We compared the six and eight-year data and found little difference. For simplicity and consistency, we decided to use only the eight-year outcomes in this analysis.

As noted by our WICHE Policy colleagues in their recent OM report that examined outcomes for students in the WICHE states:

“The credential rates from Outcome Measures data and graduation rates from Graduation Rate data are not synonymous and generally should not be interchanged. There are important distinctions as discussed in this brief. Users should clearly distinguish between OM and GR results.”

That report is a worthy read. With this caveat as background, let’s look at the outcomes.

Completion indicates that the student received a certificate or degree within eight years of entering the institution. Of the top 15 institutions in 2016, based on exclusively distance education enrollment, BYU-Idaho led in completions with 59.4%; Southern New Hampshire University reported 55.7% completion. It is important to remember that the enrollment reported was total enrollment, not just distance education students. On this measure the more traditional institutions did better than their less traditional counterparts. 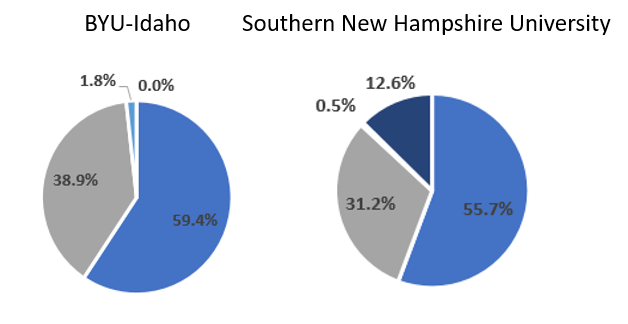 Institutions that reported the lowest completion rates include Kaplan University-Davenport Campus with 20.6% and Capella University with 19.5% completion at eight years. Both institutions also had unusually high percentages of students in the “unknown” category. 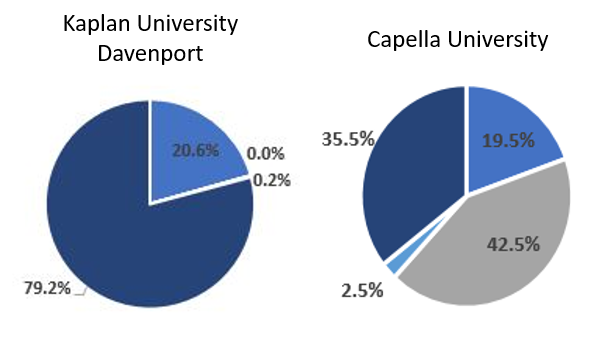 We know that a primary mission for many institutions of higher education is the successful transfer of students to other institutions. Of the reporting institutions in this analysis, Capella University led with 42.5% of students reported as transferred out, and BYU-Idaho reported the second highest transfer rate, at 38.9%. 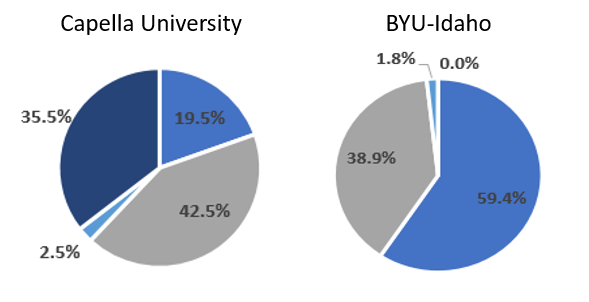 Eight years beyond the date of matriculation is 200% of the timeframe expected to complete a Bachelor’s degree, therefore, we expected this category of enrollment to be the smallest reported. However, institutions that are focused on serving part-time students would logically have the highest rates of students reported as still enrolled at eight years. These students are working toward their degree, often a few courses at a time. Of the reported institutions, American Public University System (which has a large number of students in the military) led with 19.5%. Excelsior College ranks a distant second with 6.7% of reported enrollment reported as still enrolled.

Unknown Outcomes – Those with High Percentages

Student enrollments that did not result in one of the prior dispositions are reported as “unknown”. These are troubling outcomes, as it is the responsibility of institutions of higher education to track student progress.

There are three institutions in this sample with over 70% of their student outcomes reported as unknown: Kaplan University-Davenport (79.2%), University of Maryland-University College (72.2%), and University of Phoenix-Arizona campus (71.0%).

It is unclear whether the “unknown” classification is due to the students having dropped out, is due to an inadequate classification of students as this is the first OM data collection, or some other reason. It will be interesting to watch the results in the upcoming years.

Unknown Outcomes – Those with Low Percentages

As we previously stated, the above institutions also

have a sizeable on-campus contingent. What about institutions that are focus completely on non-traditional students? For technical reasons the exact percentage for the Graduation Rate might be slightly different than the completion percentage for the Outcome Measures statistic. For purposes of these analyses, we will imagine that they are close to each other.

When we had only the Graduation Rate, the implication was that those who did not graduate were drop-outs or that the institution how somehow failed to student. By adding the additional outcomes categories, we can see that institutions might not graduate a student, but that the student is still well served. The two institutions listed below show a large percentage of students who transferred out or are still enrolled. While eight years is a long time to be still enrolled, for adults with work and families, they may be able to take only a few classes at a time.

For Excelsior College, examining completions alone would show success for fewer than half of their enrollees. With the OM, fewer than one-in-five are in the “unknown” category.

A Caveat about First-Year Data Collections

We know from our early work with IPEDS distance education data that the first year of reporting may yield problems in reporting resulting in high numbers of enrollment categorized as “unknown.” We have also noted that the proportion of students reported as “unknown” tends to decrease as institutions become familiar with the new reporting and are able to adjust their systems to better capture the data required.

However, having such large proportions of students reported with an “unknown” disposition is never-the-less concerning. The cost of higher education is high, both to students and to our society. When institutions accept students and their tuition and fees, they should be able to report what happened to the student.

The Next Post – Community Colleges and Colleges/Universities in Colorado 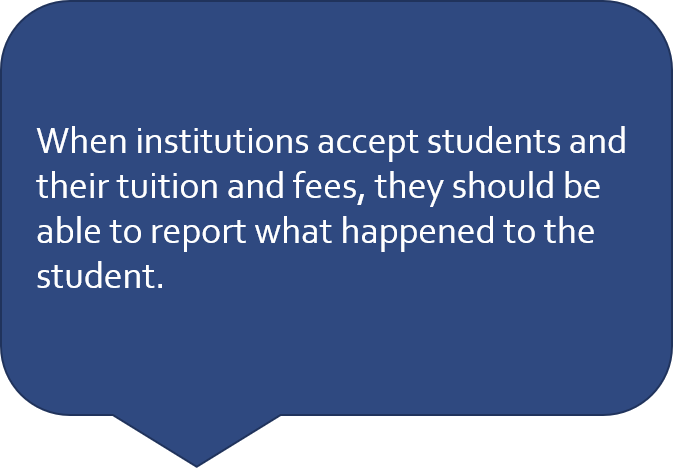 In our next blog post, we will look more closely at public institutions in Colorado, as a sampling of Outcome Measures in a single state. We will also urge you to conduct your own analyses.

These data are a gift…and the result of hard work by all the reporting institutions. Let’s use them.

1 reply on “Count All Students! Outcome Measures for Non-Traditional Institutions”