In 2018, the idea for a “Most Popular Movie” Oscar (thankfully) came and went, we debated whether we heard “laurel” or “yanni,” and J.R. Smith looks lonely on the Cavaliers’ bench after forgetting the clock in the NBA Finals.

While we did not cover any of those events in WCET’s Frontiers blog, our stories about higher education technology-enhanced instruction drew 20% more readers than ever before.

While we won’t look at the “Top 40” posts, we’ll do our best Casey Kasem impression (remember him, he was also the voice of Shaggy on Scooby Doo) and review the stories that were most popular this year…

Regular and Substantive and Interaction

Two of the top posts from 2018 were actually first published in previous years. The issue of how faculty and instructional designers should address the (not-quite-fully-defined) notion of “regular and substantive interaction” is our top draw this year… 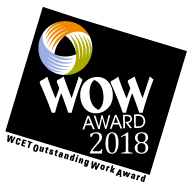 This was the sixth most popular post and was the top guest contribution of the year. The rubric was so impressive that it went on to be named one of WCET’s 2018 WOW Award winners.

The second most popular post was also a holdover from 2017, E.U. Regulations That Are Enforceable Against U.S. Higher Education Institutions, outlined what institutions need to be doing to respond to the European Union’s new General Data Protection Regulation. If you collect personal data from anyone living on that continent, you should heed to advice from WCET’s Cheryl Dowd. For additional information, she provided an update on GDPR and other data protection issues on (when else?) Halloween in 2018.

WCET’s Cheryl Dowd (sometimes with help from me) continues her domination of the top of the charts with several items related to state authorization of distance education regulations:

In the middle of his show, Casey Kasem would pause to share a tale of woe that ended in happiness or hope. The person who submitted the story would suggest a song to play in honor of someone needing to be thanked or uplifted. In honor of Casey, this year’s “long distance dedication” goes out to everyone in Washington, DC where lots was discussed, but little happened. Casey, I’d like to dedicate “Don’t Stop Believing” to our friends in the D.C. Beltway.

Now back to the countdown.

As I said, lots of new legislation or regulations regarding innovations in higher education were proposed. Little was actually accomplished in 2018, but they set the stage for possible changes coming in 2019:

Proctoring Notification Ramifications (This One is Climbing the Charts!)

Attending a St. Louis Cardinals baseball game in coordination with a WCET/SAN workshop, Leeann Fields told me the story of how a UNLV course did not properly notify students about the need to pay for a test proctoring service. The institution ended up footing the bill for the entire class in this very open tale of how the problem was addressed: UNLV Pays a Cost for Not Notifying Students About Charges for Proctoring Services. In the old days of Top 40 radio, Kasem would often not a song that is quickly rising in popularity by saying that it is “climbing the charts.” This post was published in mid-October and continues to get views. At the WCET Annual Meeting, people stopped Leeann to thank her for the article.

The most recent data from the Department of Education shows continued growth in distance enrollments while the overall higher education student population declined: Distance Education Enrollment Growth—Major Differences Persist Among Sectors. This was the eleventh most popular post.

We look forward to serving you in 2019 and welcome your suggestion for story ideas. Beyond regulatory issues, we’re always looking for good stories about lessons learned. Let us know if you would like to share.

In conclusion, I leave you with the sentiment that Casey Kasem would always use to conclude an America’s Top 40 episode…

“Keep your feet on the ground and keep reaching for the stars.”

The value of micro-credentials and badging needs continual clarification

🙂 WOOT WOOT it is an honor just to be nominated! Thank you Lindsey and Russ and all WCET staff for giving guest a the opportunity to share our work with the WCET community, and for the great resources and information you provide. Really love you guys! Go OSCQR!! http://oscqr.org